I’ve been looking for a stainless steel pressure cooker for a few years, but I’m a cheap-ass so there’s just no way I was going to spend hundreds of dollars. I was running an errand in Richmond and decided to pop into the new IKEA to have a look for big glass jars for fermenting. I happened to glance at the cooking pots and there was the shiny stainless steel pressure cooker called Dillkott for $49.99! I had to blink hard in case I was imagining things (low blood sugar and IKEA will mess with one’s sense of reality), but the glorious vision remained. I had a good look at the display model and snagged one.
First off, it’s just a really nice solid pot with a heavy bottom, so it feels like a bonus that it comes with a pressure cooker lid. The lid design is nice and simple and it works perfectly. The silicone seal pops out easily for cleaning, but it’s a bit smelly, so soak it in warm water before using it for the first time.
The packaging says it’s 10-12PSI and, according to Laura of  Hip Pressure Cooking, the standard for new cookers is 13-15PSI, so it will cook a bit slower than most recipes expect. Laura recommends to use the longer cooking-time she provides in her recipes and add a little  extra cooking time to other recipes you decide to try. Hip Pressure Cooking is a great resource and it even includes a series of beginner recipes to learn how to get the most out of your pressure cooker.

When pressure cooking it’s important to remember that you can always do a quick-release by running cold water over the lid (keep away from the vents) until the indicator goes down, check on your dish and put it back on the heat if needed. It’s not as if you’re committed to anything just because the lid is locked. Too much liquid? Take some out. Not enough liquid? Add some. Not quite cooked? Lock the lid and cook some more.  The pressure cooker is your friend, not a stovetop Jabba the Hut enslaving you to its slobbery whims.

I have been somewhat obsessed with my new pressure cooker and we’ve been inseparable for the past week, cooking everything from lentils to congee to pasta to chicken together. The very first thing I made was French puy lentils with artichokes for a family potluck where diet restrictions included meat, gluten, eggs, dairy, tomato, alcohol and soy. So, this recipe is gluten-free, vegan, yeast-free, and nightshade-free (taters, peppers, tomatoes) and it’s seriously delicious! 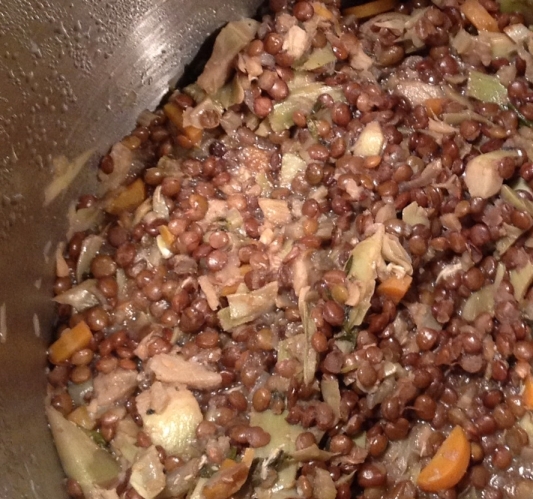 Sauté the shallots, celery, carrot, and ginger in the olive oil in the open pressure cooker pot on medium heat until soft (5-10 mins). Add the artichokes, the artichoke water (it’s filled with flavour), herbs, lentils, water and salt & pepper. Stir well, place the pressure cooker lid on and lock. Turn heat to high until it reaches pressure then turn down low. Cook for 13-16 minutes (set a timer). Cooking time depends on the PSI of your pressure cooker – I did 16 minutes. Use the natural cool-down method (remove carefully to a cool burner and allow the pressure to subside on its own) which takes about 10 minutes. When the pressure indicator goes down, open the lid and enjoy!

The Wonder of Artichokes

Canned artichokes are a serious weakness of mine. When I was a kid, marinated artichoke hearts were a favourite deluxe treat. My mom and I would leave a jar out for Santa. She would eat half when she filled my stocking and I would eat the other half in the morning when I filled hers. So much better than a cookie! But, a few years ago a friend used canned artichoke hearts in a dish and it was a revelation! They are delicious straight up. I haven’t had marinated artichoke hearts in years, but I always have a jar of canned ones in the pantry. I buy the No Name brand ones from No Frills for $2.29. They’re the same Spanish ones you get with any brand.
Artichokes are an excellent liver tonic (a classic bitter) and aid in the digestion of fats. They also make wine taste sweeter, so save your artichoke dip for your reg wines and not your family heirloom bottles.  I don’t have any family heirloom bottles, so I just think artichokes make wine taste better. 🙂